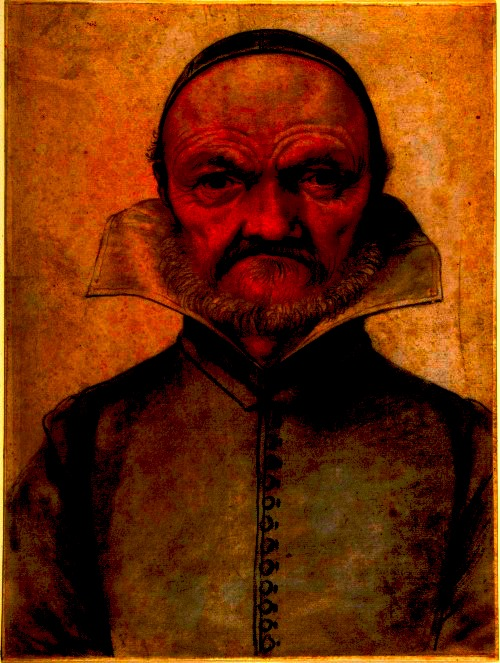 Halloween night is upon us! Do you know what that means?

That's right! Time to get scared! While it is true that France is not very big on celebrating Halloween itself, at least not as much as America, children and students still tend to celebrate it.

However, we all love a good horror story. Who doesn't? So come with me on this spooky journey to discover the 10 most haunted places in the country... 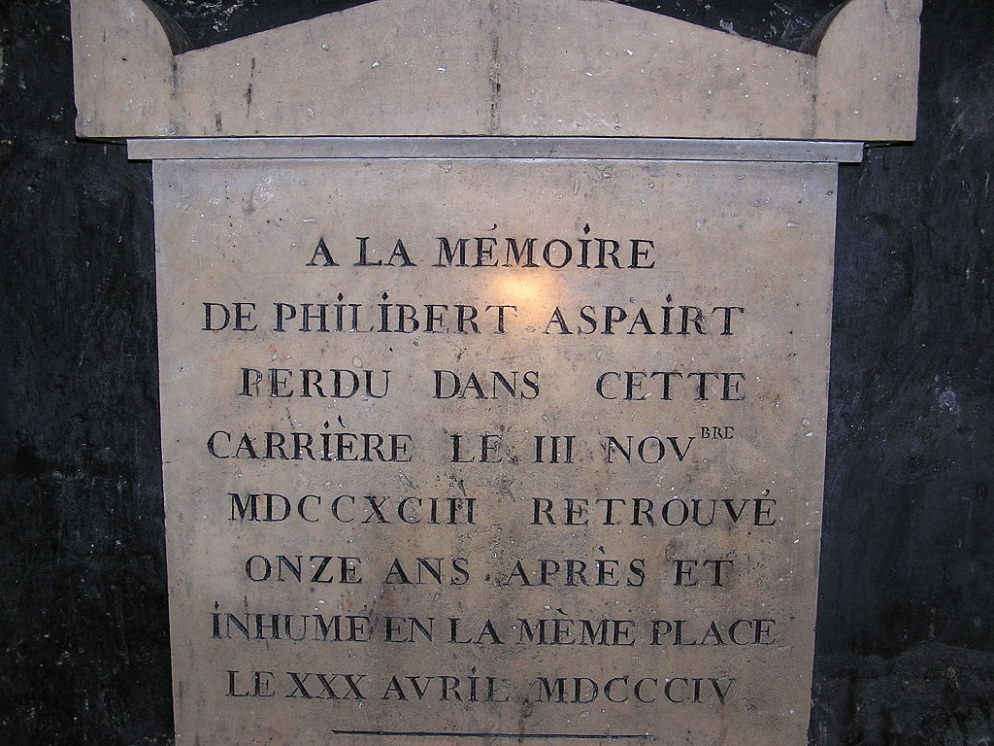 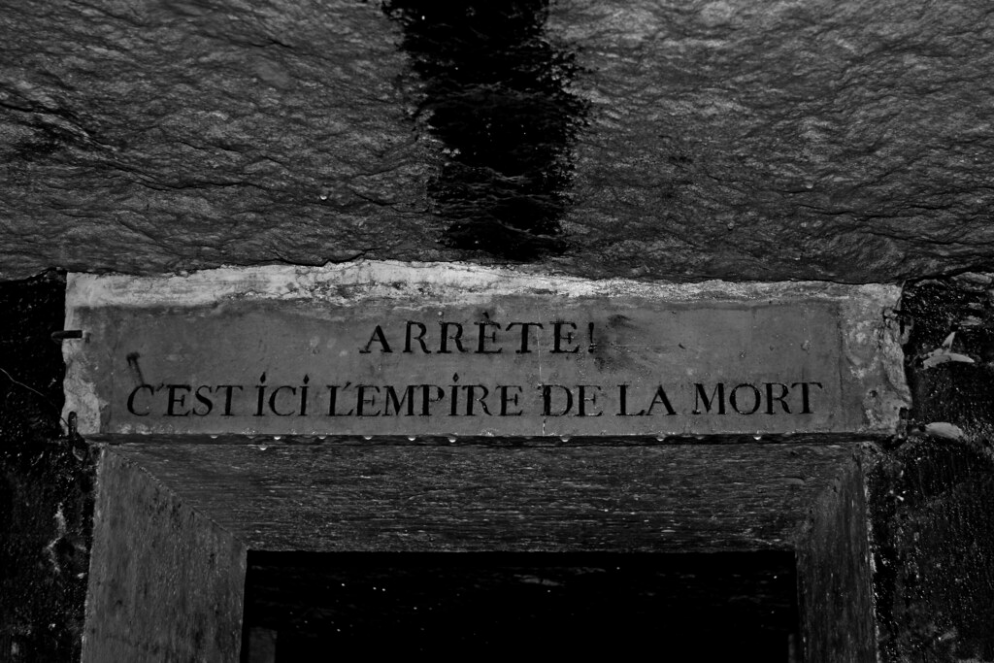 1. The Catacombs of Paris

Have you heard of the Catacombs before? If not, then they're worth visiting next time you are in Paris. The Catacombs are a hidden labyrinth deep under the capital (300km of tunnels, 20 meters under the city), where millions of Parisians have found their final resting place. It was created to deal with the city's overflowing remains of its cemeteries back in the 18th century and made into a mausoleum. But there is an even spookier story to this place...

Philibert Aspairt was a doorkeeper at the Val-de-Grace hospital during the revolution. Unfortunately, the story says that he entered the catacombs through a staircase looking for alcohol and got lost. 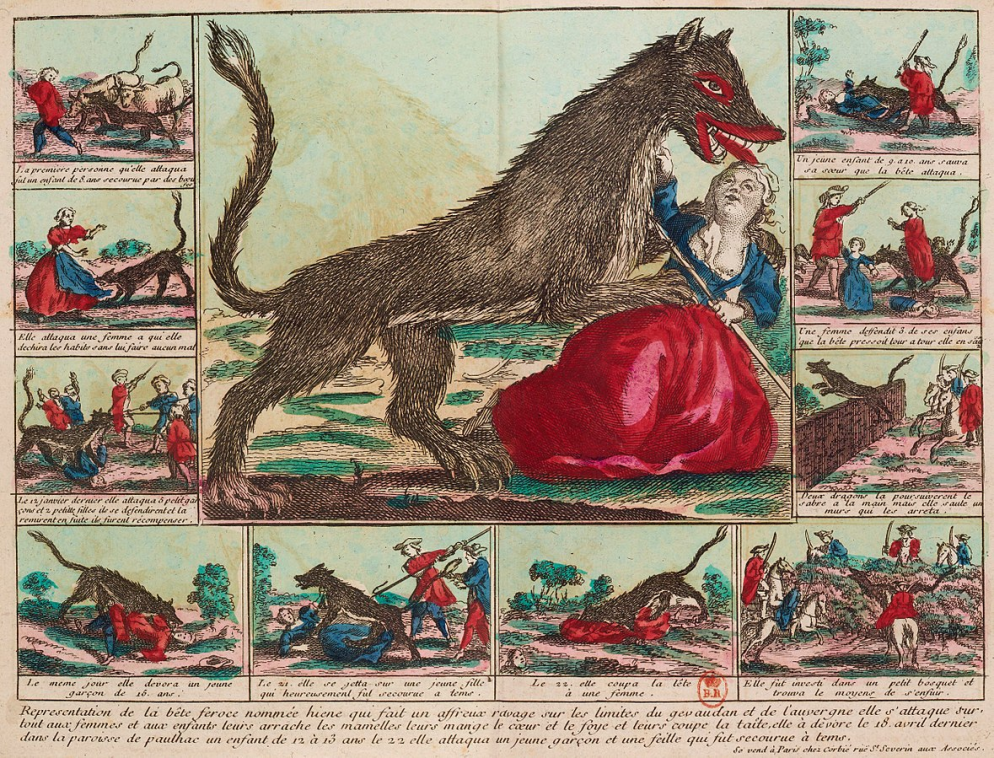 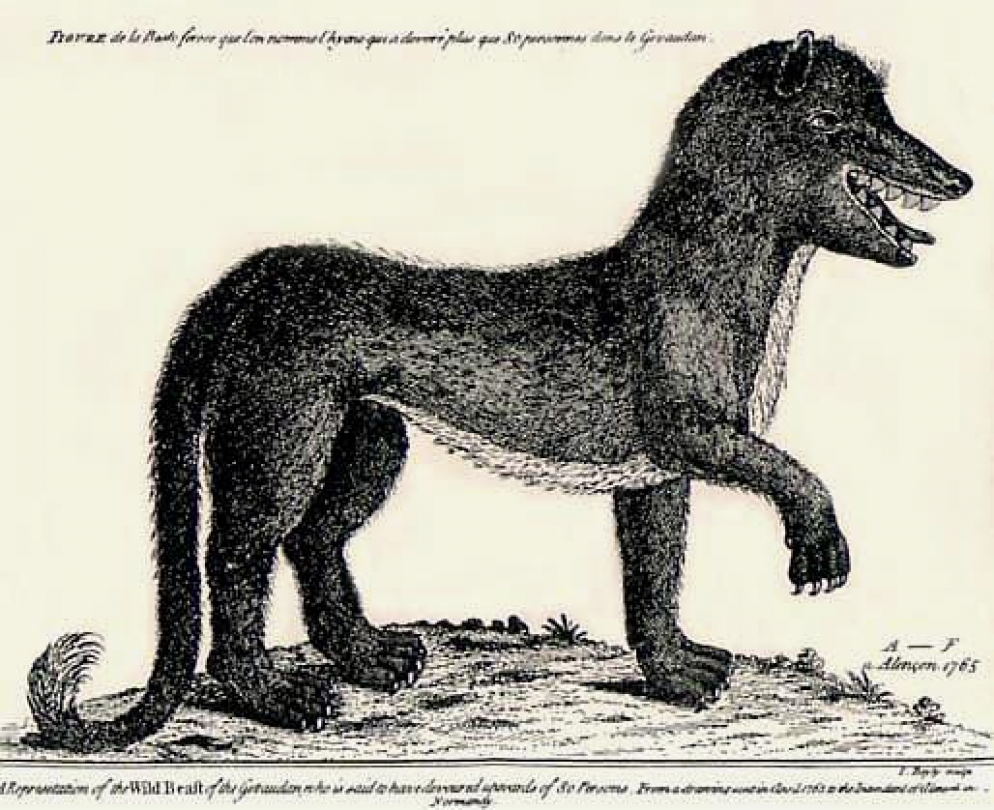 2. The Beast of Gévaudan

You might have heard about our next story as multiple films such as "Le pacte des loups" (2001) or "La bête du Gévaudan" (2003), were made about it. In the former region of Gévaudan (now part Lozère/ part Haute-Loire), the population was being terrorised by a mysterious beast described as a cross between a wolf, a hyena and a dog.

The creature attacked and killed between 88 and 124 people by tearing their throats open. It was said to be supernatural because the beast was not scared of men and could be in two places simultaneously.

A few animals were killed, and the attacks finally stopped, but the wildest theories are still going around...Could it have been a monster sent by the devil ? ... Or was this the work of a serial killer wearing wolf skin or fur? 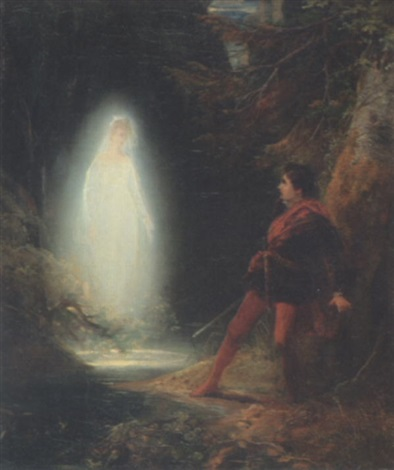 3. The White Lady of the Castle of Puymartin

The myth of the "Dame Blanche" exists in many countries (the white lady in the UK and US or la Llorona in Latin America) and many French regions.

The lady we will talk about now is called Thérèse de Saint-Clar, "une chatelaine", who was caught cheating by her husband when he returned from war.

Jealous and humiliated, he decided to lock her up in a tower, barely feeding her, until she died 15 years later.

Thérèse is said to have been buried in the wall of the tower. The castle owner says she roams the corridor at night, around midnight, lonely and sad ...

The castle is open to the public, and if you want, check it out for yourself and report back to us! 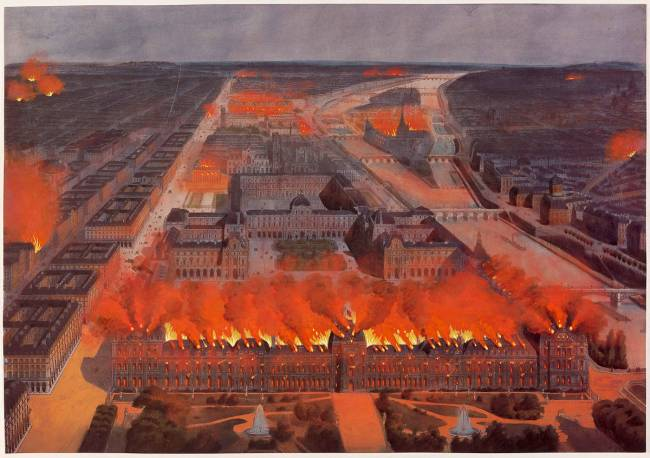 4. The Red Man of the Tuileries

A butcher called Jean who's nickname was "L'écorcheur" (literally the skinner), was killed by orders of Queen Catherine de Médicis during the 16th century because he knew too many of the court's secrets. Namely how her biggest rival "Diane de Poitiers" was poisoned. The last thing Jean said before dying was, "Je reviendrai! (I will be back!)".

And the story says that he did, in fact, come back to the Tuileries to haunt Catherine de Médicis until her death... After that, he appeared to multiple monarchs like Louis the XVI and Marie Antoinette (and we all know how that turned out!). Even under Napoleon, sights of a man surrounded by red smoke were reported and usually followed by unexplainable deaths ... His last apparition was apparently on 23 May 1871 when the Tuileries palace was destroyed by fire, but who knows...

Now you have been warned! If you happen to bump into the "Red Man"... don't run. It's already too late! 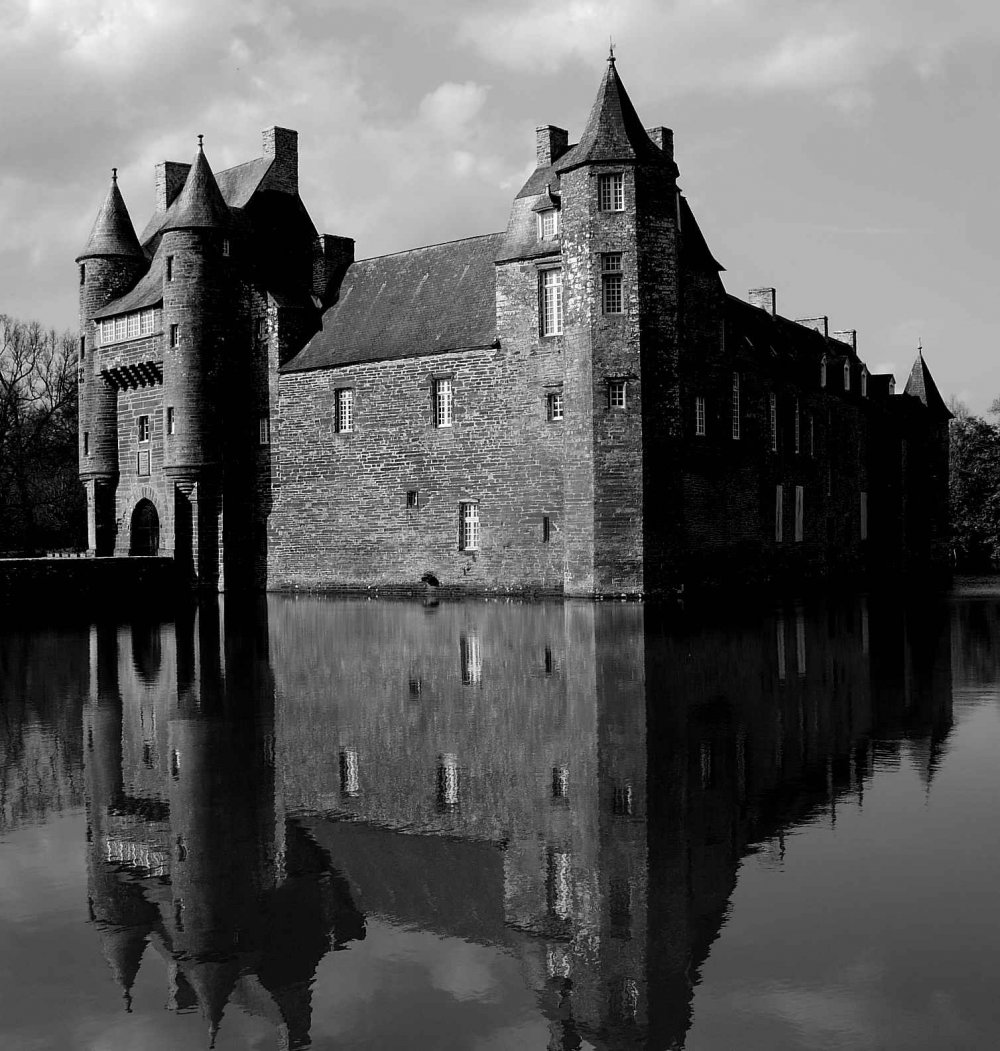 This castle, located in Illes-et-Vilaine, close to the extremely famous forest of Brocéliande (known for its multitude of Legends related to the Arthurian era), is home to multiple "spirits".

First, a poor girl, known as "la mariée de Trécesson", was buried alive near the castle on her wedding day by her brothers because they were opposed to her union. A poacher, who was probably up to no good in the forest, alerted people in the castle to come and help her. She was still alive when they dug her out but unfortunately died shortly after. Her ghost is said to be still floating over the lake in her wedding dress.

However, and as mentioned earlier, she's not the only one haunting the place. Almost 3 centuries ago, one of the far rooms of the castle was said to be the set of a mysterious card game being played every night by two ghosts. It was obviously scaring everyone in the house, so a brave young man decided to spend the night there to discover what was happening. Later that night, he was rudely woken up by the sound of people arguing. Annoyed, he apparently fired his gun and fell back asleep not long after. The next day everything had magically disappeared save for a pile of gold left on the table by the players. After facing this challenge, the young man decided that the money was to be his, but as you can imagine, the castle owner did not take the news too well and sued him for it! 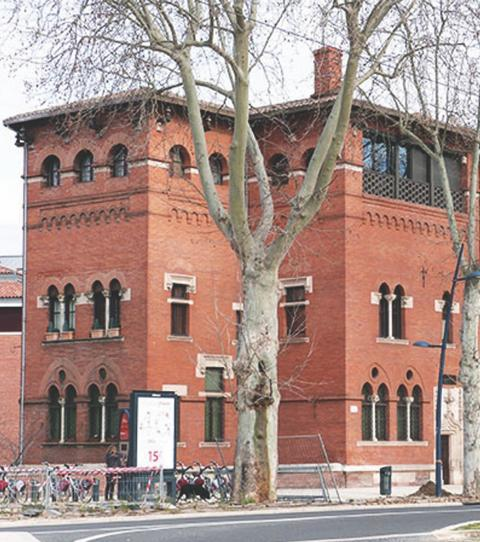 6. The Haunted Manor House of Toulouse

Situated in a neighbourhood called Saint Michel in Toulouse, this "private mansion" is known for a couple of sinister occurrences.

The mansion continues to be haunted by the ghosts of the criminals executed on-site. But wait, that's not all! The rumour says that a painter who later lived in the house killed one of his models. She is also said to still be haunting the premises ...

This house was inhabited for a while, and during that period, weird apparitions and dreary lights were spotted by Toulousains living nearby. Nothing since the building was split into different apartments, though, so who knows... Maybe these "spirits" have found "eternal rest." 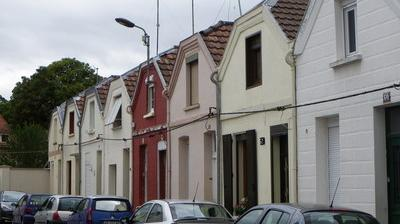 7. The Bleeding House of Saint-Quentin

In 1986 a lady who had bought a house in Saint-Quentin started hearing weird noises like pots and pans being used and scary whining coming from downstairs. While she was not too concerned at first - after all, it could have been coming from the neighbours - things started going downhill extremely fast when the walls started 'bleeding'.

The police investigation confirmed that it was indeed human blood. Sources say that the house was destroyed to be rebuilt and that the workers found a Nazi cemetery buried under the building. True or not, the incidents seem to have stopped since ... 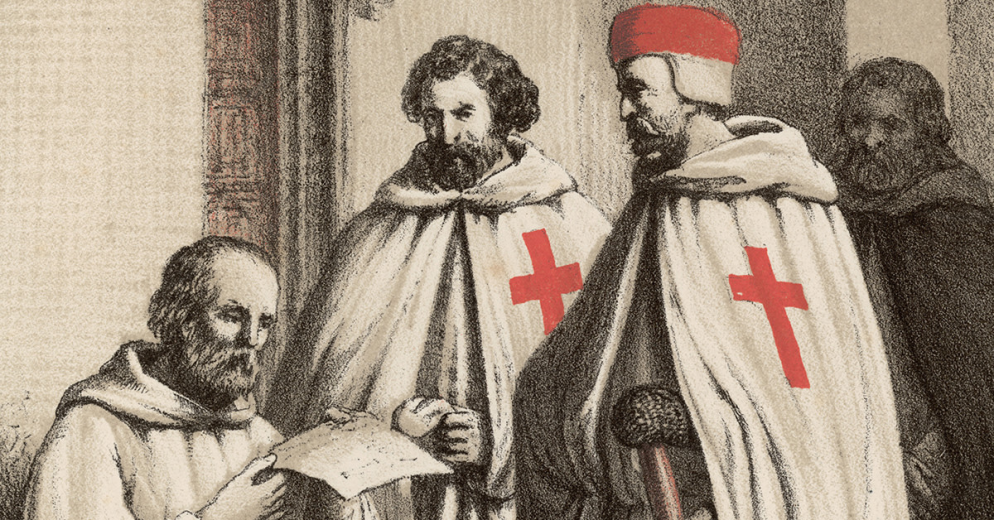 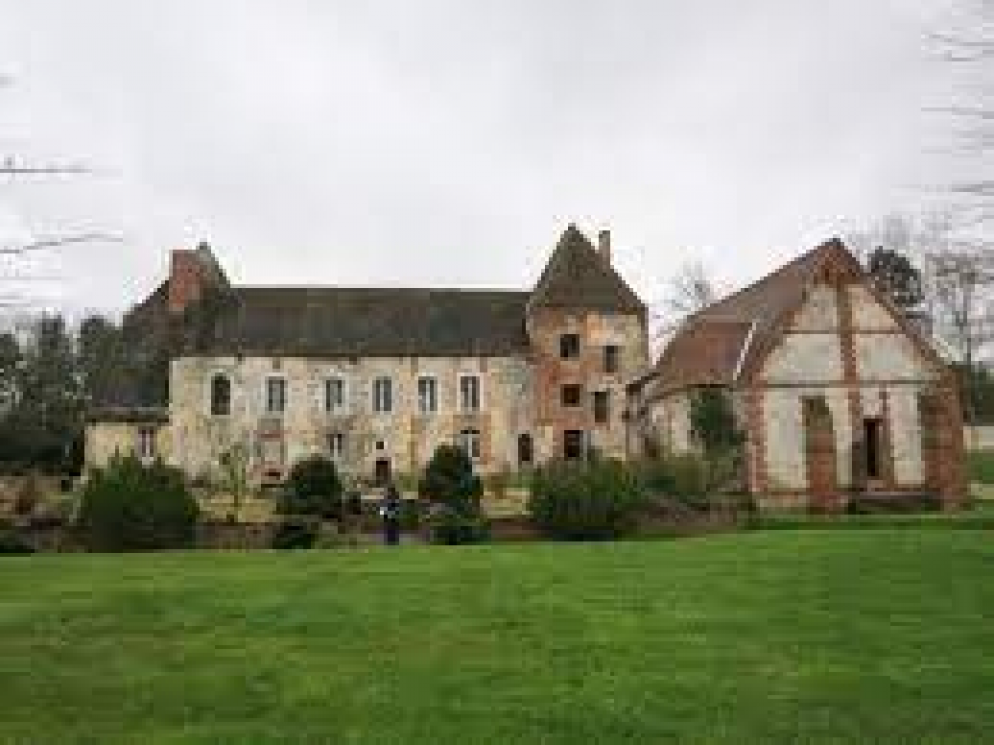 This building, located a few kilometres away from Bouchevilliers in Normandie, used to be a commandery for the Templars and has the reputation of being one of the most haunted places in the country. Creepy noises, coffins appearing in corridors, monks or even an extremely pale young lady are all part of the "spirit population" walking around the premises.

Linked to black magic, it is said that no one has been able to live in this house for very long before something terrible happens to them, be it bankruptcy, health problems or even death - it kept everyone away.

Could this be the result of a curse linked to the Templars? 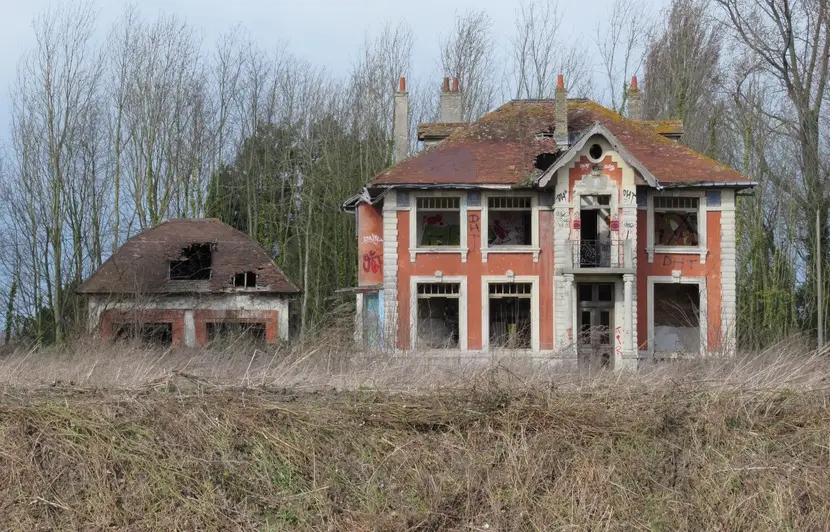 9. The House of Fort Lapin

The story says that the town of Hoymille near Dunkerque flooded in 1940, and a young girl was found drowned in her cellar. Since then, people refused to work in the house as a person was apparently hung in a room, and two workers had fatal accidents renovating it.

Apparently, creepy whispers and terrifying silhouettes have been seen hanging by the window... This house, empty for at least 20 years, was supposed to be demolished by the council. Still, it is said that the machines kept breaking down during the operation as if the building was defending itself... It won, too, because it is still standing, to the delights of paranormal enthusiasts to this day. 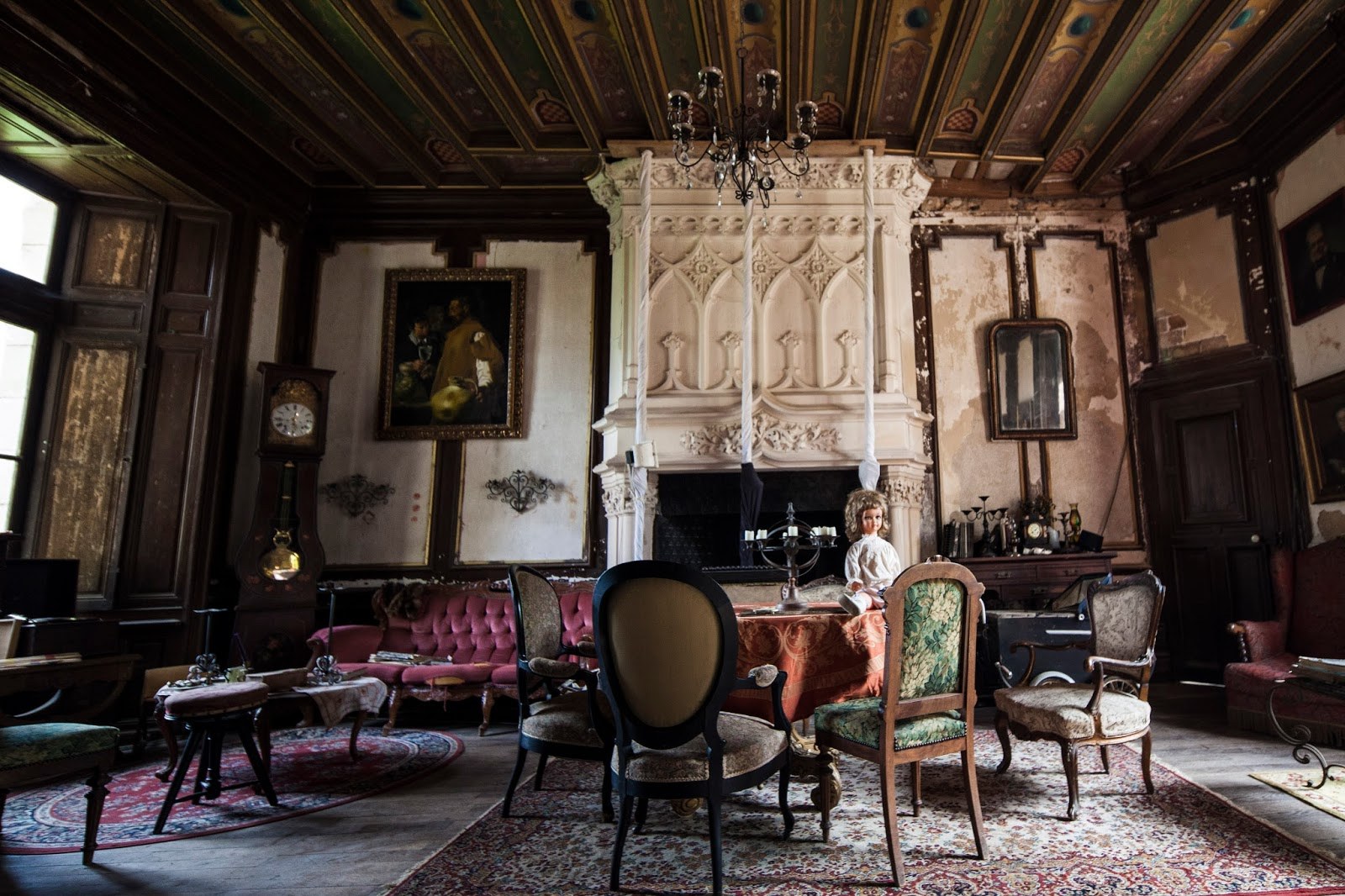 This castle is situated in New Aquitaine and was built between the 14th and the 15th century. It was then bought in 2009, and the owners have since related weird phenomenons like shadows, smoke and creepy silhouettes gliding from one room to another in the dark.

Each room in the castle seems to have its own ghost. A soldier haunts the portrait room because they have his portrait, it is said. The funeral box of a girl named Alice, who died when she was 23, appears randomly in one of the bedrooms. A ghost named Felix moves things around his former office. And lastly, a knight, a grandma but also children who like to cry at night.

Apparently, a lot of different people live there. But be aware! Not all the entities present in this castle are pleasant. A little girl who is said to still be running and playing in the corridors is considered dangerous because she's making the wood rot quicker...

Whether they are true or not, these apparitions have made the success of this castle in the media. It is now known as one of the most haunted ones in France. There are countless articles, TV documentaries, and even highly famous French and Francophone YouTubers who decided to try their luck and visit it.

Now, If you want to form your own opinion of it, you can! The castle is open to visitors and paranormal fans... Would you be brave enough to spend a whole night there? Let us know!

Enough spookiness for now! And you? What is your favourite horror story? Let us know in the comments or on social media! 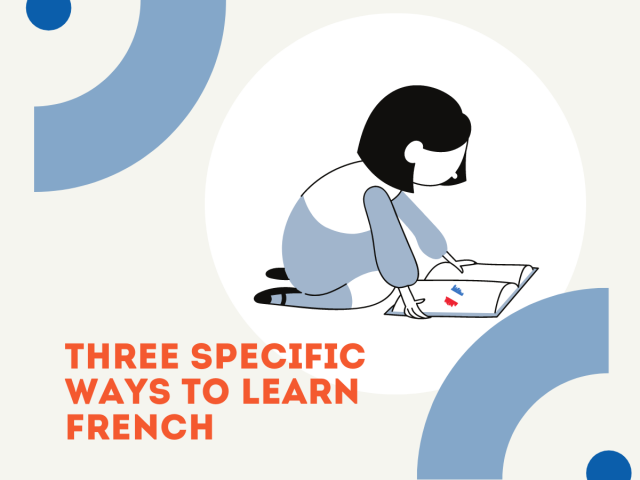 Bonjour, comment ça va? So you've fallen in love with the French language. Its beauty, the way every word sounds poetic, almost like you are singing a love song, but are still struggling with masculin and feminin? Fret not, the Learn French with Alexa team has three tips to help you with memorization, pronunciation and more. 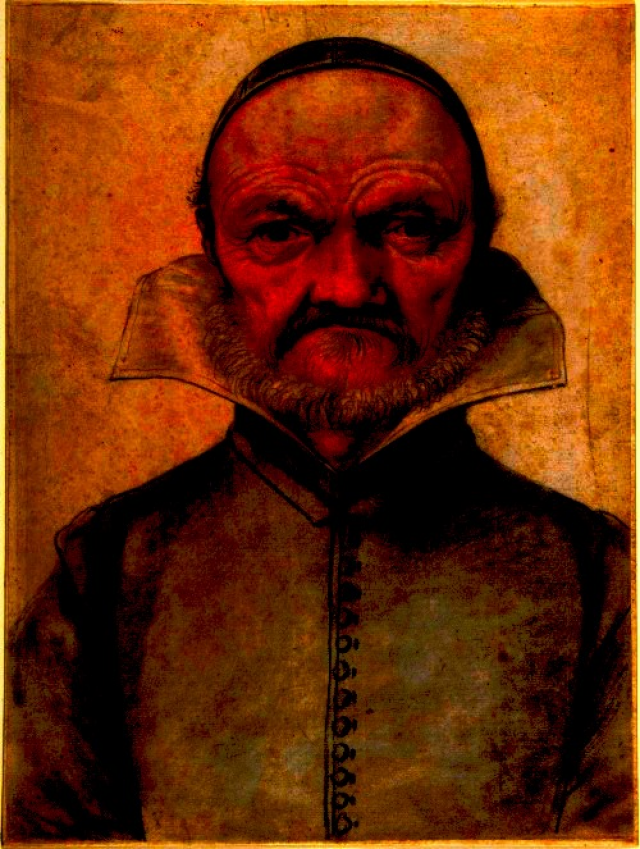 Haunted Places in France: 10 Spooky Locations and the Stories Behind Them

Posted on 27th Oct 2021 by Kafi in the misc., french culture category

Time to get scared! While it is true that France is not very big on celebrating Halloween itself, France is full of all sorts of horrors, some dating back to the 1700s.