Join Alexa and her co-stars if you want to learn more about the infamous guillotine. 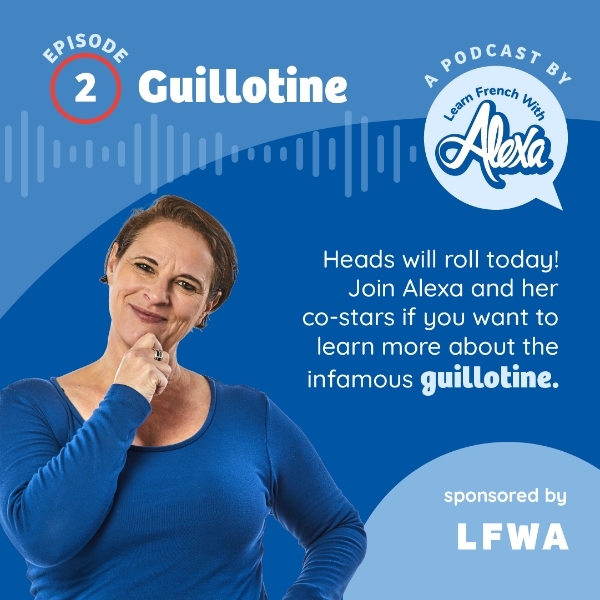 La guillotine: what is it?

A killing contraption, made of an upright frame (of around 4 metres high, weighing around half a tonne) and an angled blade.

A bit of history

While a lot of people think the French invented the guillotine, it is not the case. Traces of it have been found on engravings all around Europe. The Italians used a version called the "Mannaia" during the sixteenth century. Slightly later came the Scots with "the Maiden". In France, a very similar contraption was used to execute Henry de Montmorency (for treason) around the seventeenth century in Toulouse.

The idea of using the "Guillotine" actually came from a desire to make the death penalty more humane. In 1789, a doctor (who was in fact called “Guillotin”) suggested using a machine to carry out the death penalty in order to make it fairer and less painful for everyone.

Indeed, executions tended to differ according to one's social status: rich people were usually beheaded (quicker and often pain-free), however, peasants were either burnt at the stake, hung or worse: "broken on the wheel" (attached on a wheel and bludgeoned to death).

Guillotin’s request was accepted, but another doctor (Antoine Louis) was asked to work on the project. As a matter of fact, the guillotine was almost called "la Louisette" or "Louison" in his honour. His entire design was copied from the Scottish Maiden, apart from the blade. Indeed, the legend says that it is Louis XVI who had the idea of angling it for a smoother experience…

Around 17,000 people were officially condemned to death during the period of the French revolution known as "La Terreur" (Reign of Terror), which lasted from 1793 to 1794; the youngest victim was 14, and the oldest, 92.

Executions were trivialised to the point where people would watch them with their families. "Les tricoteuses" (the knitting women) were a group of revolutionary ladies who used to come and watch the 'show'. It is said they would entertain themselves by knitting while waiting for the execution to start.

The most famous victims of the Revolution were Louis XVI and Marie Antoinette.

The king was arrested in August 1792 before being beheaded on the 21st of January 1793. Before his death and after France was declared a republic, he was stripped of all his titles and honours and thus became "Le Citoyen Louis Capet" (Citizen Louis Capet).

The queen, however, was executed on the 16th of January 1793. It is said that her last words were an apology to her hangman whose foot she stepped on.

Different names given to the guillotine