This episode is sponsored by Lingvist, the language learning app that actually works. Visit lingvist.com and use the code ALEXA to get a free 30-day trial. 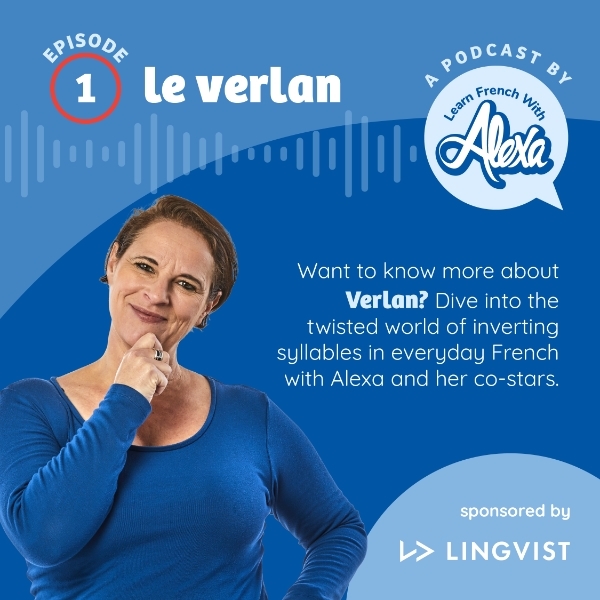 Le verlan: what is it?

The word ‘verlan’ means ‘à l’envers’ in French which is translated in English to ‘backwards’. It is a type of French argot formed by the inversion of syllables in a word. Used mostly by the younger generation it is now creeping its way into everyday language, making it vital to know if you want to survive everyday conversations in France.

How does it work?

As mentioned ‘verlan’ is indeed formed by inverting syllables in a word. However, it is a little more complicated than that: there are multiple methods.

Nowadays, we even use ‘verlan’ on words coming from Arabic or English like hard → dar. You can ‘‘verlanise” any words from the normal register to slang, although not every word is used. Verlan is such a phenomenon in French that some words have made it to the dictionary, like meuf (femme).

The equivalent in English would be ‘‘Pig Latin”, where you add a fabricated suffix or move consonants around. (Happy → appyhay)

A bit of history:

It first appeared in the 12th century, then developed throughout time. Some say it was used during the Second World War to stop the enemy from understanding communications.

It started flourishing properly around the seventies in the song ‘‘Laisse béton” (laisse tomber: let it go) by the singer Renaud.

It started being used particularly in ‘‘les cités” or the estates of France where a lot of people were coming from different cultures and socio-economic backgrounds. The younger generation felt marginalised and the use of ‘verlan’ became a way to reclaim their identity.

The verlan used nowadays is, incidentally, influenced by other languages like Arabic, etc.